Shaking in my shoes…

What a strange sensation to wake up inside a dream. To realise that I was sleeping within my dream and was woken (but I was still sleeping really) by a news presenter announcing on a television set beside my bed (which isn’t really there) that the new president of France was….scary drumroll….. Donald Trump!

“No, no, no” I screamed, sitting up in bed (I’m still dreaming all this, remember). Tears were streaming down my face and it was only the comforting arms of my husband (he looked a lot younger in this dream) which calmed me down, holding and hushing as he told me everything was going to be alright.

“It will not be alright” I cried.

And then I woke up. For real, this time.

Relief mingled with an odd sensation that this dream was far from insignificant.  I’m still disturbed now, a couple of hours later, because this was obviously not really about Mr T.  This was about his long-lost baby sister, snatched at birth and brought to France by a big, ugly Frenchman named The Stylo. For yes, unbelievably,  we have our own female version of Donny Boy right here in France, the land of Liberté, Egalité, Fraternité…

I still can’t get my head around it. This country of intellectuals, philosophers, writers, artists and famous, freedom-loving thinkers has put a Trump 2 on the starting line of this final, furious race to the top. Same hair, same fake smile, same invective speeches, same racist, bigoted, protectionist ideas.

France! What has happened to you? What do you hear in her words? What do you think she will bring to this wonderful, beautiful, tolerant country? What has gone so wrong that you imagine she will put right?

I am kicking myself that I have been too damned lazy to ever ask for French citizenship because tomorrow, when all my fellow residents of this great, fair country are slipping behind the curtain and sliding their chosen paper into a small, square envelope, I will be waiting idly at home.

And I will be shaking in my shoes, more than ever before in my whole French life. 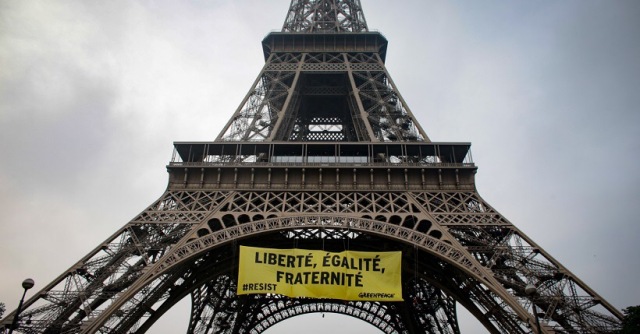 I've just turned fifty, OMG ! I didn't realise I would have so much to say about this time of my life. The pure pleasure of writing has hit me hard and this blog is sheer self-indulgence. Enjoy!
View all posts by Juliet →
This entry was posted in Non classé and tagged elections, France, humour, president, wtf?. Bookmark the permalink.

1 Response to Shaking in my shoes…